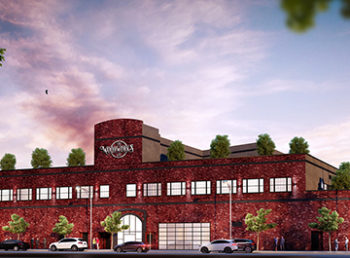 The New York City building boom shows no sign of slowing down, and the industry is faced with a profound challenge: making sure there are the people to fill the jobs in the years to come.

Construction spending is set to reach $61.8B by the year’s end, according to the New York Building Congress. Employment has expanded as a result, with construction jobs to exceed 150,000, the seventh year in a row there has been an increase.

But amid the wave of construction, developers and builders have grappled with a tight labor pool.

Some expected an eventual pullback in development of luxury residences would alleviate the fight for construction talent in the coming years, but Amazon’s plan to build as much as 8M SF along the Long Island City waterfront for its new headquarters will mean thousands of jobs will need filling.

The building service workers union 32BJ, which has publicly supported the new HQ after reaching a deal to provide Amazon organized labor for the build, estimates the campus could result in around 3,000 jobs for members.

Adding Amazon’s headquarters means the city is going to need a robust construction talent pool — pushing the industry to work harder than ever to attract and retain workers.

“There will be, say, 6M SF to build Amazon in Long Island City, but there’s probably another 2M to 3M SF that comes online in Long Island City to support it. These people need to live somewhere and shop somewhere, they need to go to school somewhere,” said Barone Management founder Scott Barone, whose construction and development firm is building 88K SF of light industrial and commercial office space and an 82K SF charter school across the street from Amazon’s new site.

“There doesn’t seem to be a significant slowdown in the future,” he said. “There is not going to be a relief in the worker shortage.”

Congress President and CEO Carlo Scissura expects HQ2 would generate “thousands upon thousands” of jobs in sectors like labor, engineering and design. He said he isn’t worried about the impact on the labor pool — noting the tech giant will be a big enough attraction in itself.

Scissura said he can’t find one example of a project in New York that has been stalled because of lack of workers, although New York has the highest construction costs in the world and projects across the city are facing widespread construction delays for a variety of factors.

“With all of this unprecedented boom, with Amazon coming, with everything, clearly there becomes an issue with finding talent,” Scissura said. “And I think every group in New York City is working on that.”

But as the supporters of HQ2 gleefully prepare for a new era of development that Amazon may usher in, and the critics continue to rail against the nearly $3B worth of incentives it was given, a wider shift is taking place in the construction labor force across the country.

In 2005, there were around 11.7 million construction workers in the United States, according to analysis released by construction data firm BuildZoom this summer.

That figure slid down to 10.8 million during the Great Recession — but kept on declining even as things improved, reaching 10.2 million in 2016. Meanwhile, the industry is aging. The share of workers aged 24 or younger dropped almost 30% between 2005 and 2016, the Wall Street Journal reports.

To shore up a pipeline of young talent, sources said the construction industry needs to invest in changing its public image.

“It’s hurting our industry, but it’s hurting all industries that the workforce is not there,” Associated General Contractors of New York State Vice President Brendan Manning said. “Diversity and inclusion in our industry is vital. If we don’t continue to reach out to more women and to more minorities to come into our industry, then we are in serious trouble.”

Working in construction is often mistakenly considered a dead-end job, Manning said. The reality is there are plenty of growth opportunities, but young people aren’t always being told about them, he said.

The AGC is working with the state education department in New York to increase awareness. It also runs career days to give high school students hands-on experience in construction work. But a major stumbling block to overcome is that many educators only see value in going to college.

“We are also running into major issues with not only parents, but school districts. Schools are very prone at this point to always point students directly to four years of college,” Manning said. “It’s not a failure for a student to go on to a trade. It [can turn] into a very successful career for them. It’s not just a job, it could be for the rest of their lives.”

An intensifying worker shortage could exacerbate costs and slow down construction. That sparks concern that housing development will lag and the national affordable housing shortage, already considered at crisis levels, will become even worse.

“[When] we hire a general contractor, we have noticed that what will happen sometimes on our jobs is that we won’t have a full crew,” Marx Realty CEO Craig Deitelzweig said. “We’ll have premiums for the group if they finish early or on time, and then penalties if they finish late.”

The problem is not just in finding workers and tradespeople; filling management roles has become a major pain point. There is a generation of employees missing, as the industry bled talent after the recession. Many people who would now be in their 30s with a decade of experience under their belt left to pursue other careers in the wake of the crash.

EW Howell Construction Group President Howard Rowland said while in recent years, his company has been able to get enough tradespeople on jobs, finding qualified management and supervisory people for internal hiring is challenging.

“We could be a lot more aggressive towards more projects if we had more qualified people to plan to manage the projects,” he said, adding that the company is now finding success in forming partnerships with places like Farmingdale State College and Stony Brook University.

He has found at least 10 people through paid summer internships.

“We made a decision a few years back to, rather than make risky hires, take a step back and to grow our own,” he said. “There is still that gap for people in their 30s to step in for the 40- and 50-year-olds … There is still a need at that level, and it’s across the industry. It’s not just us.”

Barone, who said he has 10 projects in the city right now, recruits from across the country to find superintendents and offers them $50K more in salary than they would get in other parts of the country. “A typical project manager in Virginia makes $125K, a city project manager makes $175K a year. Not only will we pay you $50K more, we’ll pay for your relocation and we will give you a contribution towards your housing,” he said. “It’s not our favorite route to go because the reality is there are less guys in Virginia that have pulled a 26-story building out of the ground.”

He said building a strong pool of talent, across the construction industry, comes back to making sure young people know that it can lead to a varied, often lucrative career.

“To learn a trade, sure, it’s not as auspicious, but it’s an incredibly good living,” he said. “I was a general contractor, I had a hammer in my hand at one point of my life. Swinging a hammer led to an opportunity to start a business, starting a business led to building that business larger, and then led to me buying real estate and led to me becoming a real estate developer.”