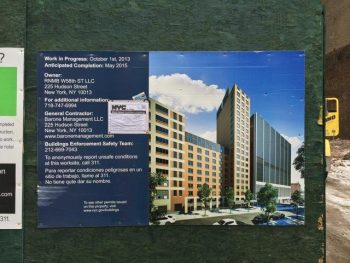 Another site on the far West Side is moving along; permits indicate 538 West 58th Street will soon become an 18-story hotel with 230 rooms, measuring 62,544 square feet. The architect of record is Gene Kaufman, and the developer is Barone Management. Sam Chang is also involved, and the project has apparently been upsized since last year, when it was originally slated to have 208 rooms.

Renderings have been posted on the perimeter fencing, and the project looks fairly typical for a Chang & Kaufman collaboration. The scope of 538 West 58th Street is more impressive than their average project, and the lot’s width is 100 feet; the configuration will result in two seemingly separate components, staggered back from the street-wall at different lengths.

Given the development’s next-door neighbor is the BMW Headquarters — and the lack of any appreciable pedestrian energy on West 58th Street — Kaufman’s latest addition will be surprisingly beneficial to the neighborhood.

Major activity is occurring within all directions of 538 West 58th Street; Durst has two residential buildings underway one block to the West, TF Cornerstone has a tower in the planning phase at 606 West 57th Street, and re-developments at Fordham and Riverside South are also moving forward. Chang’s foray into the neighborhood will be the lone hospitality venture; the vast majority of 57th Street-proximate construction on the Far West Side is dedicated to residential.

Demolition permits for the old 530 West 38th Street were approved in November of 2013, and the structures is now coming down; while foundation work has yet to begin, work is expected to be completed in May of 2015.