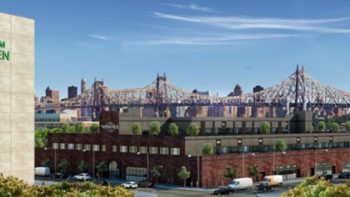 Multifamily and hospitality development has soared over the last decade in Long Island City,  the slice of Queens hugging the East River’s eastern shore. One- and two-story warehouses had long squatted along the city’s industrial byways, but steel-and-glass high-rises have supplanted those aging industrial edifices in a wholesale upending of Long Island City’s traditional character. It seems everything in Long Island City has been purpose-built, designed and constructed to serve markets pinpointed before the first yard of concrete was poured.

It’s taken Scott Barone, founder and president of New York City-based Barone Management, and a lifelong resident of Queens, to journey down the road less traveled. Barone has broken ground on Long Island City’s first commercial spec development in a generation or more.

Once completed, the three-story, approximately 100,000-square-foot structure promises to be malleable enough to house both office and industrial or flex-space tenants, while delivering enviable city and water views and spectacular frontage along four streets.

In a way, it’s a building customized to the new Long Island City. With greater numbers of local residents has come increased need for support businesses, Barone says. The development’s prime driver is the notion that new, high-quality industrial and office product can be tailored to smaller businesses that require between 2,200 and 5,200 square feet. ‘We’re going to appeal to small and medium-sizes businesses that never had quality space before,’ Barone says.

Also helping will be the building’s proximity to Manhattan right across the river, and its setting even closer to the 25,000 units of housing being built in the current cycle in LIC.

Convenience will be a critical selling point.  Barone’s building will be within steps of Court Square, the Ed Koch Queensboro Bridge and the Queensboro Plaza subway station, now undergoing NYMTA renovation. The station will be a key cog in the LaGuardia Airport Access project, a major Big Apple infrastructure improvement. The spec structure will also profit from the $76 million renovation of Queens Plaza itself. That improvement initiative promises to yield improved traffic circulation and pedestrian and bicycle access, while also incorporating a new 1.5-acre public park and beautifying the neighborhood as a whole.

Why has it taken so very long for a developer to try a spec building in LIC? Barone’s given that considerable thought. ‘I think from a macro standpoint, over 7 to 10 years of overall growth, where industrial buildings were taken down to make way for residential buildings, there were always industrial buildings available in Long Island City,’ he says.

‘If I’d had to sit down with a board and defend why we’re doing a spec development, I wouldn’t have had a lot of success. But we build with our own cash, we know this market very well and we’re willing to commit the capital. We build generational real estate.’
Having long eyed the market in Long Island City and Queens in general, Barone is not surprised by the metamorphosis of the former. ‘Here you had crappy one-story warehouses, owned by people who could turn them around [saying to themselves], I have a single-story warehouse that could be a 60-story residential building. What’s going to be worth more?’

Looking ahead, Barone says while his building is unique in the Long Island City market, it fits within a broader movement of American small business savoring renewed and vibrant growth.

‘It’s part of the larger environment of a surging economy, the tax cuts and the gig economy favored by the Millennials,’ he says. ‘It’s part of a larger trend. Those people starting and running small businesses have to operate out of somewhere.’