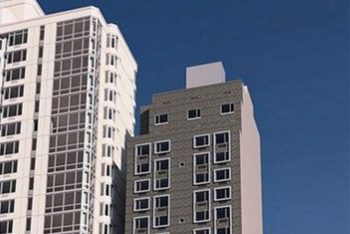 Barone Management, a New York-based development, construction and investment company, announced today the topping out of its eighth New York City hotel development. The firm is the developer and ground lessor of the property located at 338 West 39th St. in Times Square West where Barone is building a 177-room CR7 by Pestana Hotel for Portuguese-based Pestana Group. This site will be the second of many hotels planned in the United States and will serve as the hotel group’s US flagship. The announcement was made by Barone Management Founder and President Scott Barone.

“We’re excited to bring the Pestana brand and all of its exceptional attributes to New York City,” says Barone. “We pride ourselves on being able to connect high-profile operators with great assets. 338 West 39th Street offers Pestana the ideal location to launch its unique product and also serve as the hotel operator’s US flagship.”

The CR7 by Pestana lifestyle hotel brand is a partnership between Pestana Hotel Group and soccer icon Cristiano Ronaldo. The 78,069-square-foot Times Square West location will feature 177 exclusive guestrooms (six of which have a private terrace), a breakfast area, fitness center, multiple meeting rooms and a double height lobby.

CR7 by Pestana is the newest addition to Barone Management’s expanding hotel portfolio. The firm recently developed and sold the 328-room Arlo SoHo at 231 Hudson St. in SoHo and the 202-room IHG Even Hotel at 40 Nevins St in Brooklyn. It currently owns the 227-room Marriott Fairfield Inn & Suites at 538 West 58th St. in Midtown Manhattan as well as the Wyndham Garden LaGuardia property at 61-18 93rd St in Queens. An ultra-luxury 96-room hotel at 456 Greenwich St. in TriBeCa is also under development.

Pestana Hotels and Resorts is a premier European brand that has expanded globally and currently owns and operates over 90 hotels throughout Europe and the Americas, with presences in major cities throughout the world, such as London, Barcelona, Berlin and Rio De Janiero.

Barone Management is a dual platform construction and development firm operating in the New York City Metro market. With separate but complimentary divisions dedicated to developing its own real estate holdings, Barone has found a unique niche in the highly competitive NYC marketplace, allowing for an impressive track record, with a prestigious list of partners and projects. A dedicated approach focused on acquiring premium real estate, coupled with a commitment to a value-add business plan rooted in the ability to construct its own projects, has yielded a solid portfolio of NYC assets.