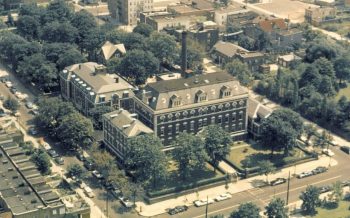 The developer purchased the 140,000 square-foot former orphanage property with plans to build market-rate, affordable and senior housing and educational facility

NEW YORK CITY—Barone Management, a development, construction and investment company based in New York City, purchased the former Angel Guardian Home for Little Children from the Sisters of Mercy for $37.5 million. The roughly three-and-a-half acre lot is bound by 63rd and 64th streets and 12th and 13th avenues, in the southwest Brooklyn neighborhood Dyker Heights, which is located between Bay Ridge and Bensonhurt.

Scott Barone, the founder and president of Barone Management, tells GlobeSt.com how elected officials and community leaders helped shape the development plans. “They put it right on the table,” says Barone. “They said, ’Listen, the residential is very nice but we really need senior housing and we really need schools. The school district currently is 11,000 seats over-capacity. This what we really need in this neighborhood. What can you do to help us?’”

In January 2018, the consulting group Class Size Matters, noted that 79% of K through 8th grade schools are overcrowded in School District 20 where the Dyker Heights development is located. The consultants also found that 88% of K through eighth grade students are in overcrowded schools in this district.

Barone Management now plans to allocate 60% of the property,150 units, to market- rate condominiums,15% to 421a affordable rental housing and the remaining 25% to senior housing and educational uses.

“It turned out to be the most valuable business model as well,” Barone adds.

With the approximately $200 million project, the developer plans to rehab the existing five-story main building at 6301 Twelfth Ave. It will be used for the educational purposes and possibly some component of the senior housing. The site was originally built in 1902, as an extension of the Convent of Mercy and served as an adoption agency until the 1970s, according to the Brooklyn Reporter. Last year, the Angel Guardians’ offices moved to Industrial City in Sunset Park. Except for the main building, the other structures will be demolished and replaced with new residential construction.

The property has been mostly vacant for the last two decades, according to Barone. The Narrows Senior Center, the last remaining tenant, occupying 6,000 square feet, left the premises a couple of months ago.

He notes previously both the Sisters of Mercy and his company had not discussed their plans with the press due to a confidentiality agreement. But nonetheless, he credits local newspapers including the Brooklyn Paper and Brooklyn Reporter with drawing attention to the concerns of the community.

“We’ve gotten to know the Dyker Heights neighborhood. We’re looking forward to breathing new life into a site that has been vacant and shuttered off from the community for a better part of a generation,” says Barone.

He anticipates breaking ground in 2019 and a 2022 completion date.