Angel Guardian Home poised for its next act 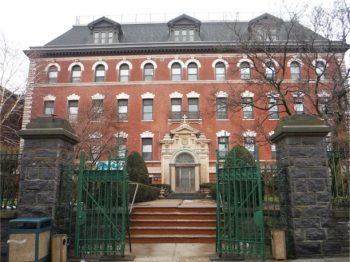 The storied Angel Guardian Home in Dyker Heights will soon house a new school, an assisted living facility, affordable housing and, the developer hopes, a secondcoming of the senior center that shuttered inside the facility last spring.

The approximately 140,000-square-foot, blocklong property located at 6301 12th Ave. was sold for $37 million to development firm Barone Management at the end of 2017 by the Sisters of Mercy — longtime owners of the old orphanage whose “mercy” was oft-questioned in the wake of the hush-hush sale, which became final in August 2018.

The turnover sparked community concern and a rash of rallies aimed at putting pressure on the New York City Landmarks Preservation Commission to preserve the property, as well as on its buyer (whose identity remained a mystery per confidentiality agreements for almost half a year post-purchase) to consider the neighborhood’s needs in his plans.

“The confidentiality clauses prevented us from saying anything, and that caused a lot of groundswell in the community,” firm head Scott Barone said Monday. By the time he convinced the sellers to lift the clause, he had already been made aware of two major needs — senior housing and a school.

“And I’m happy to say that we’re in the process of delivering on both,” he said.

On the 13th Avenue side of the property, Barone said, the School Construction Authority has purchased 24,000 square feet to build a 600-seat public elementary school.

On the 12th Avenue end, the historic 42,000-square-foot building that once housed Angel Guardian’s orphanage will be reconfigured into a new 127,000-square-foot, 125-unit assisted living facility for seniors.

Between the school and the senior facility will be a three-story, 130-unit residential building where 15 percent of the apartments will rent for below-market rate, Barone said.

The original building  is expected to be landmarked, Barone said. A Landmarks spokesperson could only confirm that, while a formal designation process has not been initiated, the commission continues to study and monitor the site.

“We’ve always said that we’d preserve that main building,” Barone said, stressing that the extension of the building will be done “under the supervision of Landmarks.”

SCA President and CEO Lorraine Grillo pointed to the Angel Guardian Home’s school district, District 20, as one of the most overcrowded in the city when discussing the new school’s significance.

“The SCA’s purchase of this parcel is part of our unwavering commitment to create additional seats for students in overcrowded areas like District 20,” she said in a statement.

The original structure was built in 1902, according to city records. It served as an extension of the Convent of Mercy, housing hundreds of orphans and eventually acting as a formal adoption agency until the 1970s.

In 2003, the Angel Guardian Home merged with St. Mary’s of the Angels Home to form the MercyFirst network of agencies. Up until late last year, the campus — which spans the entire block — housed the offices of the Sisters’ foster care program as well as the Narrows Senior Center, which closed its doors despite community pushback in May 2018.

The senior center — operated by Catholic Charities Brooklyn & Queens — was the last remaining leaseholder inside the complex when it closed. As the dust settled and seniors were uprooted to new facilities, Barone told The Brooklyn Daily that he’d offered Catholic Charities a 10-year lease once construction was complete.

Barone said Monday that, while that offer remains on the table, it had been a while since he’d heard from Catholic Charities. “If the seniors are happy where they are, God bless them,” he said, “but we are still committed to that if [Catholic Charities] wants it.”

A win-win or a mixed bag?

The current plans seem like a win-win, said Councilmember Justin Brannan, who frequently fought alongside colleagues in government to get the most out of the property. Though the building isn’t in his district, he maintains it could greatly benefit his constituents.

“I’m very happy with what we were able to accomplish here,” he said. “This is what happens when you have a developer who is willing to listen to the community and do the right thing.”

“Of course it’s a shame the church had to sell off this beloved and historic property in the first place,” Brannan added. “But the community will benefit greatly from what will soon become of this land. I believe this is known as a win-win.”

Fran Vella-Marrone, president of the Dyker Heights Civic Association and a frequent protester outside the home in 2018, called it more of a “mixed bag.”

While assisted living isn’t exactly what Vella-Marrone and company had in mind when they called for senior housing, she maintained Monday that “that’s still the best thing happening in there.”

That, and Barone’s transparency now that plans are in motion.

“He’s been working with our commission and he’s been very upfront about things,” Vella-Marrone said. “That’s a win.”

In the end, Barone said, a campus “that was isolated from any type of community usage for the better part of 100 years,” will now be opened up to serve “the youngest inhabitants of Bay Ridge and Dyker Heights, and the people who want to spend out their days in Dyker.”

Barone hopes to break ground on the assisted living facility “by the end of this year,” with the residential complex following closely.